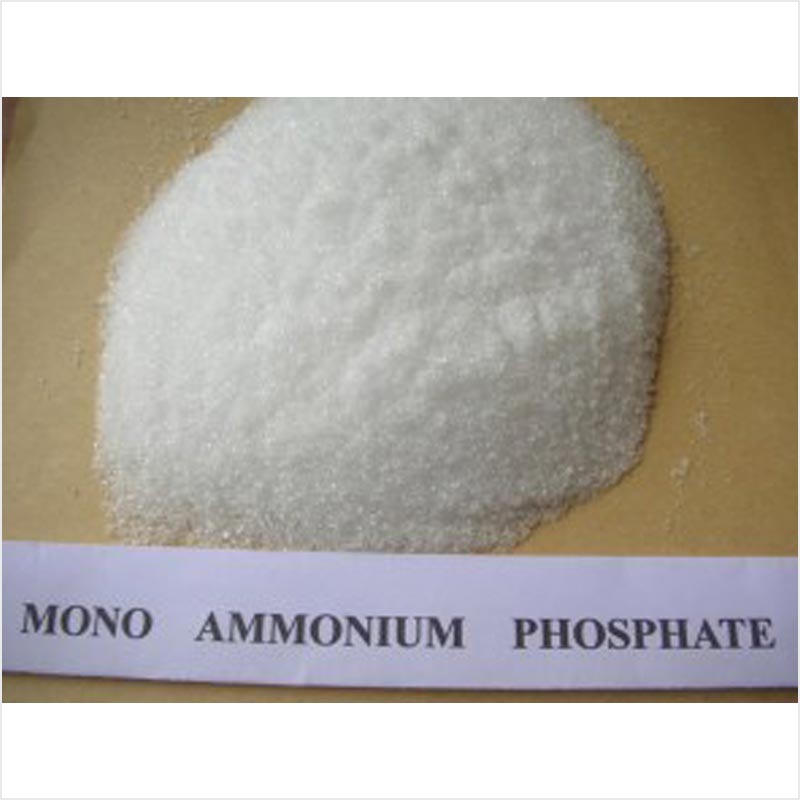 The process for manufacturing MAP is relatively simple. In a common method, a one-to-one ratio of ammonia (NH3) and phosphoric acid (H3PO4) is reacted and the resulting slurry of MAP is solidified in a granulator. The second method introduces the two starting materials in a pipe-cross reactor, where the reaction generates heat to evaporate water and solidify MAP. Other methods exist as well. An advantage of manufactured MAP is that lower-quality H3PO4 can be used compared with other P fertilizers often requiring a more pure grade of acid. The phosphorus pentoxide (P2O5) equivalent content of MAP varies from 48 to 61 percent, depending on the amount of impurity in the acid. The most common fertilizer composition is 11-52-0.

Agricultural use
MAP has been an important granular fertilizer for many years. It's water-soluble and dissolves rapidly in adequately moist soil. Upon dissolution, the two basic components of the fertilizer separate again to release ammonium (NH4+) and phosphate (H2PO4-), both of which plants rely on for healthy, sustained growth. The pH of the solution surrounding the granule is moderately acidic, making MAP an especially desirable fertilizer in neutral- and high-pH soils. Agronomic studies show that, under most conditions, no significant difference exists in P nutrition between various commercial P fertilizers under most conditions.

Growers apply granular MAP in concentrated bands beneath the soil surface in proximity of growing roots or in surface bands. It's also commonly applied by spreading it across the field and mixing it into the surface soil via tillage. In powdered form, it's an important component of suspension fertilizers. When MAP is made with especially pure H3PO4, it readily dissolves into a clear solution dispersed as a foliar spray or added to irrigation water. The P2O5 equivalent content of high-purity MAP is usually 61%.

Management practices
No special precautions are needed with the use of MAP. The slight acidity associated with this fertilizer reduces the potential for NH3 loss to the air. MAP can be placed in close proximity to germinating seeds without concern for NH3 damage. However, MAP used in foliar spray or added to irrigation water, shouldn't be mixed with calcium or magnesium fertilizers.

MAP has good storage and handling properties. Some of the chemical impurities (such as iron and aluminium) naturally serve as a conditioner to prevent caking. Highly pure MAP may have a conditioner added or may require extra care in handling to prevent clumping and caking. As with all P fertilizers, employ appropriate management practices to minimize any nutrient loss to surface or drainage water.

A high purity source of MAP is used as a feed ingredient for animals. The NH4+ is synthesized into protein and the H2PO4- supports a variety of metabolic functions in animals.